How to Build, Flash and Debug the ESP32 nanoCLR on Windows using Visual Code

You only need to build it if you plan to debug the CLR, interpreter, execution engine, drivers, add new targets or add new features at native level. If your goal is to code in C# you just have to flash your MCU with the appropriate firmware image using nanoff. There are available ready to flash firmware images for several targets, please check the Home repository.

This document describes how to build the required images for .NET nanoFramework firmware for ESP32 targets. The build system is based on CMake tool to ease the development in all major platforms.

If you want a simple, efficient way, we can recommend you to use Dev Container to build your image. This has few requirements as well like Docker Desktop and Remote Container extension in VS Code but it is already all setup and ready to run!

If you prefer to install all the tools needed on your Windows machine, you should continue this tutorial.

-Step 1: Create a directory structure such as the following:

-Step 5: Review and adjust several JSON files to match your environment (as documented below)

If you intend to change the nanoCLR and create Pull Requests then you will need to fork the nanoFramework/nf-interpreter to your own GitHub repo and clone the forked GitHub repo to your Windows system using an Git client such as Fork or the GitHub Desktop application.

The main branch is the default working branch. When working on a fix or experimenting a new feature you should do it on its own branch. See the Contributing guide for specific instructions on the suggested contributing workflow.

If you don't intend to make changes to the nanoBooter and nanoCLR, you can just clone nanoFramework/nf-interpreter directly from GitHub.

Make sure to put this folder high enough on your drive, that you won't trigger long filename issues. CMake does not support filenames in excess of 250 characters.

Setting up the build environment

After cloning the repo, you need to setup the build environment. You can use the power shell script or follow the step-by-step instructions.

Manual install of the build environment

(If you already have installed ESP-IDF Tools you can skip this step.)

-Step 1: Install ESP-IDF Tools by using the installer provided by Espressif here. The installer includes all the pre-requisites.

-Step 2: After launching the installer you have to follow the wizard and follow the instruction there. Follows some aspects worth mentioning.

-Step 3: Location of the IDF repository. You can set this to a location of your choosing. After the installer completes, you'll find a git clone of the ESP-IDF at this location. 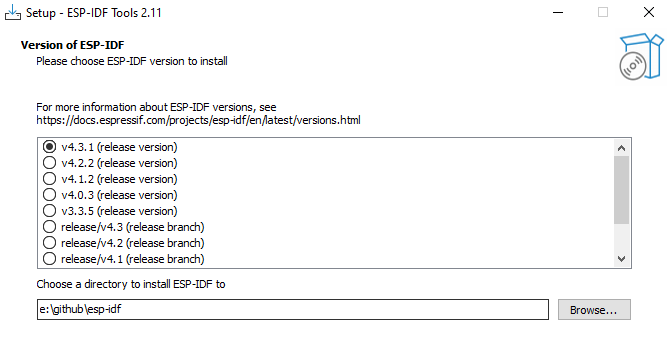 -Step 4: Location of the IDF toolchain and other tools. The default it's at the user folder. Feel free to change this to another location of your choosing.

-Step 5: At the options screen, know that you don't have to install all the tools there. Follow the recommended option to be able to build .NET nanoFramework. Also note that you may want to install the toolchains only for the chip serie(s) that you're planning to build for. 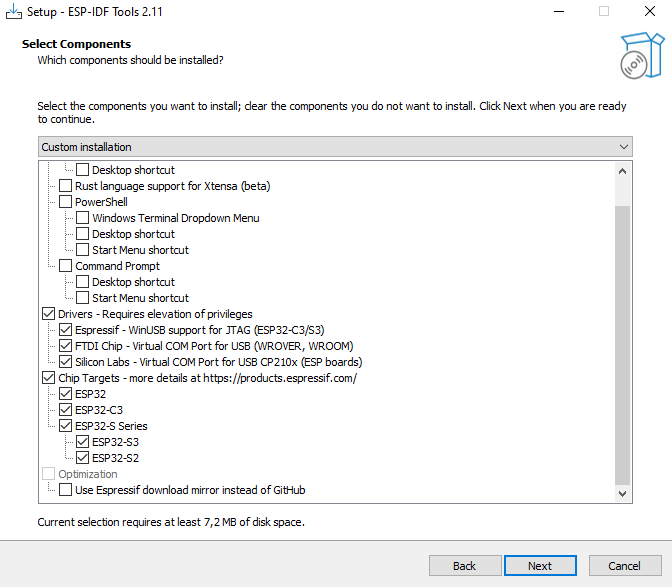 -Step 6: The install step may prompt you for permission on installing drivers and launch secondary installers. And be aware that it can take a while to complete...

-Step 7: After the installer completes, open a command prompt at the IDF repository location with elevated permission and execute the script install. This will hopefully install all the requirements and prerequisites.

-Step 8: Now execute the script export. This will hopefully update the path environment variable of your machine. You can check the success of the operation by opening another cmd prompt and print the content of the path variable.

⚠️ At the time of this writing, the CMake version distributed with IDF it's outdated. You have to edit the path environment variable after this step and remove the entry pointing to CMake so the current CMake it's used. This should be something like (...).espressif\tools\cmake\3.20.3. ⚠️

-Step 9: Calling the above scripts it's not 100% guaranteed to effectively install everything and updates the path. This can be because of permission issues, updating the path variable and others. Here's the image of the path on a machine where the update was successful so you can compare it.

-Step 10: Also worth checking if the following environment variables have also been setup:

⚠️ Having the path properly setup it's absolutely mandatory in order to be able to build. ⚠️

-Step 2: Run the PowerShell script Initialize-VSCode.ps1 that's on the install-scripts folder. This will adjust the required settings, build launch configuration for debugging and setup the tasks to ease your developer work.

-Step 1: Launch Visual Studio from the repository folder, or load it from the File menu, select Open Folder and browse to the repo folder. VS Code could prompt you asking "Would you like to configure this project?". Ignore the prompt as you need to select the build variant first. Next time VS Code open it should load the workspace automatically.

-Step 4: Wait for the build to finish with Build finished with exit code 0 output message.

Note: If there are errors during the build process it is possible to end up with a partial build in the build folder, and the CMake/Ninja build process declaring a successful build despite the .bin targets not being created, and a CMake clean not helping. In this case deleting the contents of the build folder should allow the build to complete once you resolve the issues that cause the original failure.

The above may have some errors if:

A good remedy for most of the build issues is to manually clean the build folder by deleting it's contents and restarting VS Code.

-Step 1: The third file that gets flashed into the ESP32 is the bootloader.bin which will be located here build/bootloader/bootloader.bin after a successful build.

-Step 2: Connect your development board.

-Step 3: Some ESP32 boards require to be put into "download mode". Most don't even need this. Check the documentation for your variant. One of the most common options are: hold down the GPIO0 pin to GND or holding down the respective button during power up.

-Step 4: Download the image to device. - In Visual Studio Code go to menu "Terminal" -> "Run Task" and select "Flash nanoCLR to ESP32 from the list.

Watch the video tutorial here and follow the step that should be done in Visual Studio 2017 Community Edition. Skip the steps that describing uploading the nanoCLR into the STM32 Nucleo board.

You can now debug nanoCLR on the ESP32 by pressing F5 in Visual Studio Code.

Notes on JTAG debugging on ESP32

The JTAG connections on ESP32 DEVKITC are:

If flashing nanoCLR via a COM port (default), then be aware that you need to disconnect the JTAG to avoid it preventing the bootloader from running, and therefore being unable to reprogram the ESP23. e.g. if you see the following pattern repeating, unplug the USB-OCD-H, and then the programming will proceed.

You may have to add the IRAM_ATTR attribute to a function that you want to debug, so it can be loaded in RAM. When launched the debugger will normally stop at the main task. Its not possible to set a break point on code that is not yet loaded so either step down to a point that it is loaded or temporarily set the method with the IRAM_ATTR attribute.

If you do not have access to any special hardware required for debug methods mentioned above you still may use some old-school technique: just place some temporary code at interesting places to get the required information. Using steps below you will get that information in Visual Studio's standard debug output window. Certainly Visual Studio must be debugging something to have that window in working state. So this hack will work only in cases when you want to debug a nanoCLR code which can be executed via managed code.