A .NET nanoFramework Virtual Device is available as a .NET Tool. It allows to run nanoCLR on Windows machines. This can be useful for development purposes, performing automated tests on pipelines and other usage scenarios that benefit from having a virtual device opposed to real physical hardware. The virtual device can be accessed just like a real one through a virtual serial port or a TCP/IP port.

The Visual Studio extension can interact with the .NET nanoFramework virtual device just like it does with a real device. It will be listed in Device Explorer window and will offer the same option as a real device. 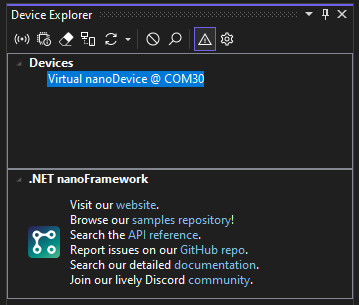 Note: the .NET Tool with the nanoFramework virtual device is not exclusive of the Visual Studio extension. It's a global tool that can be use standalone. Read below instructions on how to use it.

The serial port that exposes the nanoFramework virtual device is provided by HHD Software which has kindly sponsored a free license for running their tool in .NET nanoFramework tools.

To enable and configure .NET nanoFramework virtual device, open the Settings configuration dialog in Device Explorer (click on the cog wheel icon in the toolbar). Navigate to the Virtual Device tab. 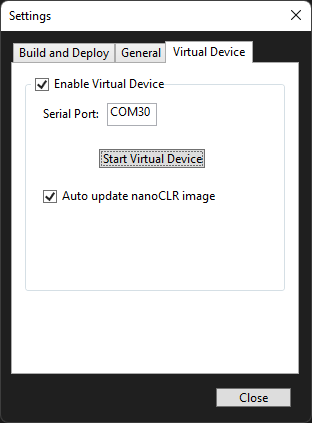 A specific serial port can be configured to expose the Virtual Device. Enter a valid COM port name in the Serial Port text box and this will be used. If the virtual serial port doesn't exist yet, it will be created.

The virtual device can be started & stopped by clicking the respective button.

Last configuration pertains the automatic update of the nanoCLR image that the virtual device will be running. To have the tool automatically update and use the latest available version, just enable the checkbox.

Note: if a specific nanoCLR version was installed, the virtual device will use that one. This is useful if you're testing a specific version of a library of firmware version, for example.

The output from the virtual device is made available in Visual Studio Output pane, just select .NET nanoFramework Virtual Device.

The virtual device has implemented most of the libraries and APIs that do not require hardware interaction. For those a "stubbed" version is offered meaning that a call to those APIs will result on a Not Implemented Exception. There is also no support for network. This will be added in a future version.

Once the tool is installed, you can call it by using its command nanoclr, which is a short version of the name to ease typing.

This command lists the installed virtual serial port bridges in the system.

This command creates a virtual serial port that will be used to expose the nanoCLR instance. A random COM port will be created. A COM port can be optionally specified as an option. In this case, if that COM port it's not being used, it will be created.

This command installs HHD Software Virtual Serial Port Tools software. The installer is downloaded from their website and executed. Executing the installer requires "Install Driver" privilege and must be elevated. If the process running it doesn't have the required permissions an UAC prompt will be show.

These options run the nanoCRL instance loading the specified assemblies and exposing the device on a specified interface. Please note that for successfully running a nanoCLR instance it's require to load a set of assemblies and specify an interface to expose it, otherwise it has no use.

Load a set of assemblies

This loads a set of .NET nanoFramework assemblies and runs the nanoCLR. These have to be in .NET nanoFramework PE (Portable Executable) format. They are found in the output folder of a Visual Studio project (typically bin\Debug or bin\Release). Full path of the PE files is required.

This option tries to resolve cross-assembly references between the loaded assemblies.

Maintenance operations with the nanoCLR

The nanoCLR is, in fact, a wrapper to the nanoCLR instance that is distributed as DLL so it can be easily updated. The following operations are available to manage this.

Gets the version of the current nanoCLR instance.

Checks for stable versions of nanoCLR and updates it, if there is one. A version can be specified. To check preview versions add the --preview option.