This binding was tested on two types of piezo buzzers. First type of buzzer has two pins vcc and gnd. Second type of buzzers has addition signal pin.

The Buzzer class can use either software or hardware PWM. This is done fully transparently by the initialization.

If you want to use the software PWM, you have to call the constructor that takes in one integer: public Buzzer(int pinNumber).

To use the hardware PWM, make sure you reference correctly the chip and channel you want to use, and call the constructor that takes two integers (chip and channel).

Also you could explicitly pass a PwmChannel if you want to construct that yourself.

Here's an example how you could use Buzzer.

Important Depending on your platform, you may have to setup the pins properly. In case of ESP32, use the nanoFramework.Hardware.Esp32 nuget then configure the pin properly like Configuration.SetPinFunction(21, DeviceFunction.PWM1);. That should be done before creating the Buzzer.

Buzzer allows to play tone for certain duration like in example above. Or you could start tone playing, perform some operation and then stop tone playing like in a following example.

The result will be the same as in previous example.

Buzzer allows you to play only single tone at a single moment. If you will call SetFrequency sequentially with a different frequencies then the last call will override previous calls. Following example explains it.

You could use any types of buzzers in any order. No changes to code are required. 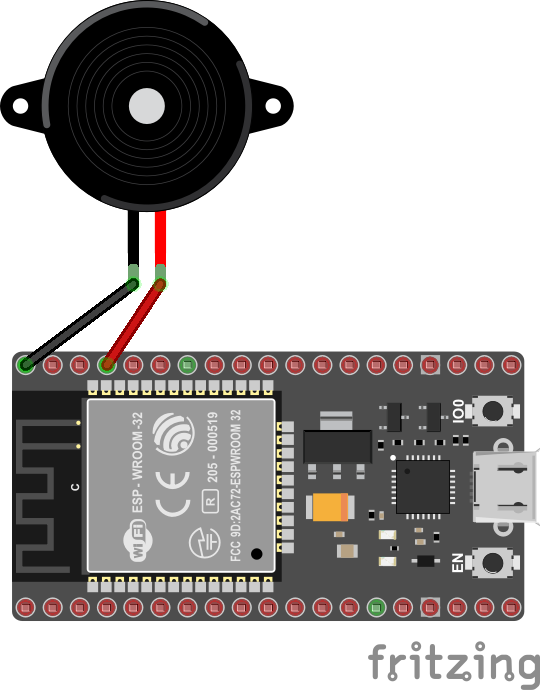 This sample contains a wrapper on a Buzzer called MelodyPlayer.

To create an instance of a MelodyPlayer use following line:

After initialization MelodyPlayer allows playing melody represented by sequence of MelodyElement objects. MelodyElement is a base class for two types of elements:

Following example demonstrates how to create MelodyElement sequence and how to play it using MelodyPlayer:

Play method MelodyPlayer accepts a sequence of MelodyElements as the first parameter and a tempo as the second. Tempo is an amount of quarter notes per minute. So the more tempo is the quicker melody will be played.

Also there is an overload of MelodyPlayer.Play with 3 parameters: MelodyElement sequence, tempo and transposition value. Transposition increases or decreases every tone of melody sequence by desired amount of semitones. For example: following line will decrease every tone of sequence by one octave since octave consists of 12 semitones.

As far as MelodyPlayer.Play method is not asynchronous, calls of this method are wrapped by task like this:

Presented sample plays Alphabet song using two buzzers. The song is hardcoded in a Buzzer.Sample.cs file as a sequence of MelodyElements. Read more about Alphabet song on Wikipedia